Thanks, to the firefighters who extinguish chimney fires 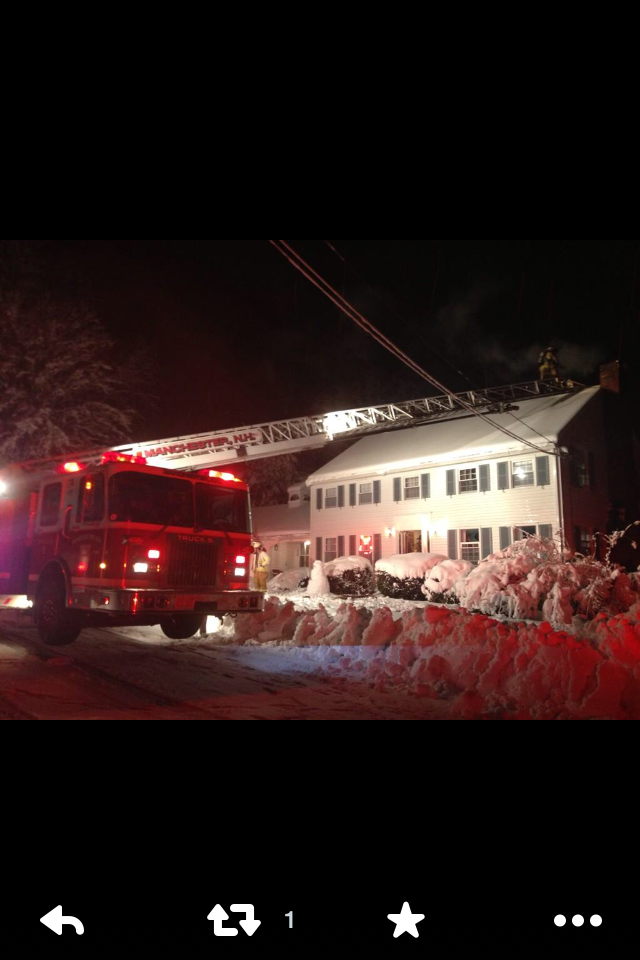 This photo was posted on Twitter on Thanksgiving eve by @massfirepics. It shows a ladder truck responding to a reported chimney fire, with extension, in Manchester, New Hampshire.

Here at the Chimney Safety Institute of America, we paused to post this photo, as we were creating a recap of all the media-reported or eyewitness-photographed fires during the month of November. There have been dozens of reported fires across the U.S. involving fireplaces, wood stoves and chimneys.

We don’t know how many of these chimney fires can be 100% blamed on the chimney; we don’t know, also, how many of these homes had their chimney inspected prior to being used. We don’t know in all cases how many had been “swept” — their flues vigorously brushed to remove creosote (or other unwanted combustible material.) We don’t know if the fireplace had been properly maintained but the fire occurred anyway because of user error — by the homeowner or renter.

What we DO know is that firefighters are kept busy in the cold Autumn and Winter season with responses, many involving a component of the chimney — an average of over 24,000 annually, according to the Consumer Product Safety Commission. Firefighters responding to a 911 call for help don’t have an easy task.

They involve heights.
In freezing weather.
At night, usually, or in the dark.
On snowy or slick rooftops.

Firefighters have to be careful. Many chimney fires are contained to the flue, so they use their proper techniques (such as using dry chemical powder) to extinguish the fire while preventing the residence from being made uninhabitable for the temporarily displaced occupants.

Chimney Safety Institute of America works to educate firefighters all the time.

We even created this free downloadable PDF brochure entitled After the Fire that firefighters in many areas of the country give to homeowners victimized by a chimney fire, to aid in their post-fire recovery.

The importance of this post, on Thanksgiving Day is, to say thanks. These fires are occurring to people who WANT to build a fire in their homes for heat, or aesthetics. We’re big fans of those people!

As always, we urge people who want to use their fireplace this holiday season to get their appliance inspected by a qualified chimney sweep technician, such as someone who is certified by the Chimney Safety Institute of America. You can locate such a professional by zip code at CSIA.org/search. (If they are booked when you call, don’t give up; it’s because CSIA certified pros are the top of their game, and thus, worth the wait!)